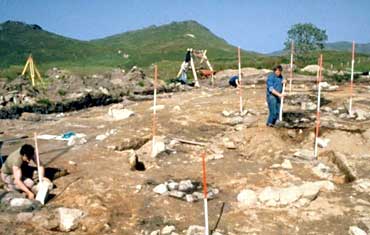 Description
Placing of the house at a focal point in the landscape, imported artefacts, and size of the house, are all elements indicating a centre of power and influence, a Chieftain's house from pagan times in Lofoten.

In the 10th Century, the house seems to have been abounded, or pulled down. At least it is not in use after this period. Could this have been the house of Olaf Tvennumbryni, the Chieftain who left to Iceland to settle with his people?

Why leave to Iceland? Based on what causes? And what kind of changes were operating in the society, here at the Sacred Heights? What kind of archaeological material and written sources can tell us about changes from Pagan times towards Christianity.

Excavation Details
Remains of this house site resulted in large scale excavations from 1986-1989. The results showed two house sites covering each other, dated from AD 200-1000. Priority was given the house foundation I:Ia, which is interpreted as the remains of a Chieftain's Residence. The oldest house foundation (Borg I:Ib) is dated back to the Early Iron age, and measured 67 m in length and 6-7 m wide. It seems that this house was pulled down to build a bigger house about AD 700. This house foundation (Borg I:Ia) measured 83 m in length and about 9 m wide and was probably erected, or pulled down in the middle of the 10th Century. This is one of the biggest house foundations excavated from the Merovingian Period and Viking period in Scandinavia.

Artefacts found in different rooms in the house bear witness of a mighty Chieftain. Imported drinking vessels, clay-sherds from fine tankards and fine work of gold filigree, are only some examples which shed light on long distance travelling or at least contacts with areas from far away. In one of the postholes in the banquet hall, five small gold leaf amulets were found.

Could these be archaeological remains of religious rituals in pagan times? And what do we know about day to day activities and handcrafts?