In 1981 at the Borg Heights the local farmer found pieces of broken glass and pottery-shards (shards of ceramic jugs) from central-Europe reckoned to be more than 1000 years old. Such artifacts were previously unknown in Norway, and show contact with the Continent.

In Norway, imported artefacts similar to those from Borg have only been found at Kaupang in the South.

Excavations from 1986-1989 revealed shards of imported glass vessels of the Late Iron Age, a material found only once north of the Arctic Circle. Together with the glass, the first example of imported pottery from this period was found. These artefacts are regarded as indications of high social status and of long-distance connections. Thus, from the beginning, Borg was regarded as a possible chieftain's farm, and therefore a central place. This theory is supported with the occurrence of large boat-house foundations at Borg.

It is probable that the artefacts imported from the Continent and from the British Isles can be regarded as symbols of power and prestige. Still, it is difficult to decide whether the objects reached Borg as exchange of gifts or within the framework of trade. Anyway it seems more likely that these items came to Borg through a very long span of time, from the sixth to the tenth century. 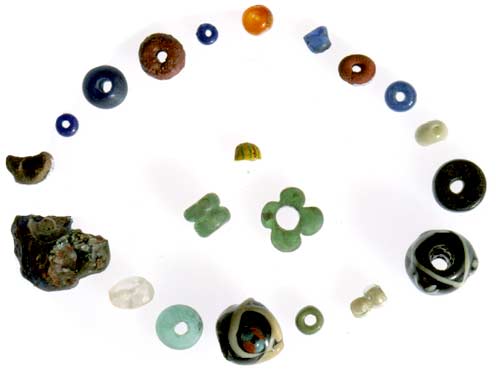 Beads from the continent