Historians and other researchers have identified Lofotr as the medieval name of Vestvågøy. One of the sources supporting this interpretation is the "Lándnáma bok". The book describes the colonization of Iceland, and is believed to have been written down in the 12th and 13th century AD. The settlement of Iceland is supposed to have taken place between 870 AD and 930 AD, though there may have been Irish or Scottish monks there before that.

The "Lándnáma bok" includes Olav Tvennumbruni from Lofotr as one of the settlers at Iceland:

"Olav Tvennumbruni was a man.
He went from Lofotr to Iceland.
He took the whole area of Skeid between Tjorsá and Sandlækiar.
He was a great sacrifier to the gods.
Olav lived at Olafsvellir.
He is buried in the Bruna mound under the Varde Mountain."

It is possible that Olaf Tvennumbrunni was one of the chieftains that once lived at the Sacred Heights of Borg.

So, who was this person Olav Tvennumbruni and why did he leave for Iceland? The area he took at Iceland is considered as one of the best agricultural areas in the country - near Skalholt (the bishop's residence). The farm Olafsvellir still exists.

The Lándnáma bók gives a quite detailed description about Olaf Tvennumbruni's family and descendants. He was married to Áshild, and they had three sons: Helgi Trauste, Tore Drive and Vade. A further listing of their descendants is to be found in the book.

One theory explaining Olav's travel is the fury of King Harald Hårfagre. Several chieftains got into conflict with him and fled away. Shortage of land is another possible theory. Chieftains' emigrations are often explained due to different conflicts with other, more powerful chieftains.

Even though we do not have much information about the reason why Olaf left Lofoten, we can be quite sure that he brought with him his ships, together with his people and as much of his goods as possible. 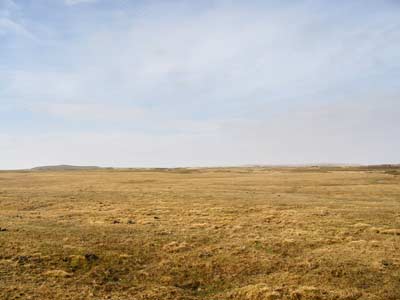