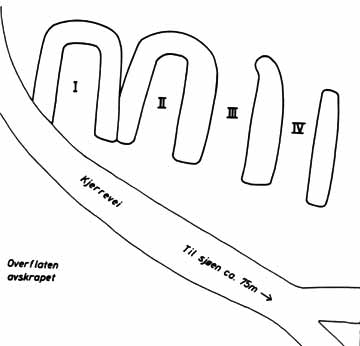 The Courtyard was identified by Johansen in 1974, but it was known earlier locally. Today the site remains are visible as 4 kinds of house foundations, situated next to each other in a half oval formation. The surrounding area indicates remains of several house foundations, destroyed by modern activity.

Localisation: The site is situated close inner Borg fjord in outlaying fields, about 75 m away from the sea. Borge Church lies 800 m towards SW. The Iron Age farm at Bøstad lies just beneath the mountain area about 1 km to the W. Two huge boathouse sites (over 15m long, see also boathouse sites nr. 15) are situated between 150-300 m NE of the Courtyard. According to Johansen, the size of the Courtyard has parallels with the Courtyard localised at the nearby Island, Gimsøy.

National Registrations of the Courtyard in 1978 gave following measures:

It is hard to localise more foundations at the surface, but the Courtyard was probably covering a larger area. Situated further north, 4 smaller pits have been localised: 0, 5- 1,75 m in diam, 0,3-0,4 m deep. Such pits could represent cooking pits.

Dating: Neither the site at Bøstad nor Gimsøy has been excavated, but investigations from parallel sites in Northern Norway, their shape and size (like the sites at Leknes, Bø and Åse) indicate Early Iron Age dating (Johansen 1978).