This website invites you to explore three places on the Atlantic rim of north-west Europe. Mayo in Ireland, Kilmartin in Scotland and Lofotr in the Arctic north of Norway all occupy landscapes whose ancient inhabitants have left a rich archaeological and historical record. In this website you can explore these three landscapes and learn about their past.

Using archaeological methods, we can discover ancient field systems where men and women first settled and ploughed the earth, no longer dependent on the haphazard fortunes of the hunter-gatherer. The day-to-day lives of people living over a thousand years ago are revealed by the remains of their houses and huts, by their cooking pots and drinking horns, the games they played, the clothes they wore, their grain-mills, their tools and their boats. Looking at pollen remains deep in the soil will tell us something about what they grew and ate.

But we can also learn about the way they thought and felt, their beliefs. There are ritual sites, churches, monasteries religious carvings, holy wells and sacred trees and burial grounds. Such sites reveal not just the practicalities of everyday life in the first millennium, but some of the deepest beliefs of earlier generations about who they were, the purpose of their lives, and their place in creation. 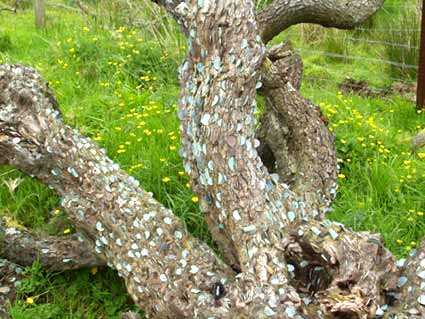 An old tree by a well-spring near Kilmartin is studded with coins
bashed into it by local people - a modern version of an ancient practice.

We can learn about the way power was organised in these societies, too. Warlords and kings armed themselves and built forts and court-complexes to Power was held by the man with the best weapons, the strongest fighting men, the most wealth. Archaeology will reveal to us some dimensions of this world of power.

During the first millennium, the people in these three landscapes learned about reading and writing. The literate people (mostly clergy, in our period of interest) produced huge quantities of writing, and the surviving texts tell us a great deal about their world. There are travellers' reports written down by Classical writers - these are among our earliest sources. But there are also laws, for example, which are very revealing of the way society was organised. There are saints' lives, legends and sagas, poetry and hymns and much more.

We have to handle such materials with care, however. A writer is never simply an objective recorder of events, but always has some purpose for writing, usually promoting the agenda of the person who is paying him - and at this stage it is usually a 'him' and not a 'her'. When reading such material, then, we must always be conscious that the author was often, to a greater or lesser extent, a propagandist or spin-doctor. He was also influenced by the perceptions and thought-world of his time, which may have differed radically from ours.

Another key to understanding our landscapes is to look at place-names. Many features of the landscape have names that go back hundreds or even thousands of years. A river, for example, may keep its ancient Celtic name long after the Celtic language has been displaced by another tongue. But such names can still be understood by linguists, and many lochs and rivers contain the names of ancient Celtic deities, giving us an insight into pre-Christian cult. Later place-names in Scotland and Ireland with the element kil or cill tell us that there was a church there centuries ago, usually with a saint's cult, and sometimes at a place where pre-Christian rites might have been celebrated.

Place-names containing dale (from Norse dalr) or fell (fjall is Norse for 'hill') can be found in western Scotland, echoing the period of Norse occupation.

Place-names have been less well exploited than archaeology and literature as an aid to understanding the first millennium, but scholars are now making rapid progress in this field.

The evidence enables us to understand how the people who lived in our three landscapes saw dramatic change over the centuries, while at the same time some characteristics remained unchanged. The fact that all three areas are on the Atlantic coast meant that they were exposed to the constant stimulus of contacts with sea-farers - traders, raiders, visitors, missionaries, fishermen and the rest. Such contacts brought a stream of ever-new ideas into these dynamic societies, ideas which were absorbed and transformed to varying degrees by local people.

The sea-roads brought new ideas to coastal societies.
This is a view of Lofotr.

One of the single most obvious changes was that of religious belief. It was during this period that the Celtic peoples of Scotland and Ireland, and the Norse to the east, gradually accepted Christian beliefs and practices. This was a slow and informal process for the most part, and there is very little evidence for just how such conversion took place, or how people felt about this change at the time. Many of the pre-Christian beliefs disappeared, though Christianity absorbed these to a remarkable extent into its own story, and thus preserved them.

In the wake of Christian belief came the fundamental Christian skills of literacy and book production. Churches and monasteries were centres of reading and writing, copying of manuscripts, teaching the literary skills of interpretation and recording events. We owe much of our knowledge of this period to the records left by monks in their scriptoria who recorded significant events year by year, who wrote accounts of the lives of their founders, or who preserved in manuscript form the laws and legends of their people.

The appearance of literacy meant that other cultural changes took place, as oral practices gave way to written culture. For example, for many centuries people had entered into legal contracts by taking part in a public ritual, speaking to each other, calling on witnesses whose hands they held, standing in a certain place and reciting certain binding words accompanied by certain gestures. Such ritual practices were displaced by written expressions of contract - by land-grants for example, charters, and so on, written in manuscripts. Nevertheless, even today we see echoes of old ritual practices: when two people 'shake hands on a deal', for example.

In all three of our landscapes, a major change that took place in the first millennium was the centralisation and consolidation of power. At the beginning of the period power had been exercised on a more or less local basis by the rulers of small kingdoms or chieftaincies. They were at the apex of social units based on kinship. In Ireland, there were perhaps around 150 such small kingdoms, and Scotland and Norway had similar patterns of local lordships. But such entities were constantly at war with each other, jockeying for power, invading each other's territories, seeking to gain advantage. It was a system in permanent flux, unstable and subject to all the uncertainties of armed conflict.

Over the millennium, certain kin-groups and lordships gradually consolidated power over others. The tribal and local nature of power began to be absorbed into a more national system, where overkings succeeded in subjecting local rulers to their authority. Initially this authority might mean little more than demanding tribute from subject rulers, but this was the beginning of a process that led eventually to the formation of the nations of Scotland, Norway and Ireland.

The Church had an important role in this process, too. The use of writing in establishing royal powers, promoting laws and governing larger territories when the king might be absent by creating an administrative class should not be underestimated. The Church also had a strong ideological commitment to kingship, seeking stability under the rule of 'the Lord's anointed', peaceful borders, and less violent transitions from one king to his successor.

In this Atlantic periphery, language was a shifting feature. In Scotland Gaelic, Pictish, British, Norse and English were all spoken in different times and in different areas. Ireland was somewhat simpler with Gaelic as the native language, but with Norse-speaking settlements where the Vikings established themselves. Lofotr was fundamentally Norse, but had interchanges with Sámi people who spoke another quite different language..

Among all these nations, one further language was a uniting factor: Latin. This was the language of literature, but also of prayer and poetry in the Christian tradition, and drew the whole of western Europe into a common culture.

It is impossible to construct a single coherent narrative of these three areas over the first millennium. Instead we must deal with a rather fragmentary collection of evidence, recognising the peculiarities of different landscapes and different periods of history.

This web-site makes it possible to move from historic sites and artefacts to themed essays and back again, either by clicking links within the texts or by browsing the lists of themes and sites in the left-hand panel and at the foot of the pages. From a king's court complex in Norway you can move to an essay on kingship in Scotland, and from there to a Scottish kings' inauguration site, for example.

By exploring these links, putting together the evidence from different times and places, you will begin to compose your own narrative of the Atlantic rim in the first millennium.