Description
Small scale investigation in the 1980`s localised several house dwellings in the area called Borg III. Further excavations from 1999-2002 uncovered the remains of a longhouse dated back to AD 1000-1200. 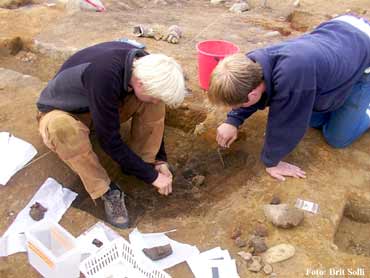 org III is situated between Borg I and the old Rectory. Investigation in the middle of the 80`s localised several house sites in this area. Further excavations in 1986 and 1987 uncovered walls and peat, fireplaces, rooms and artefacts all indicating medieval times. Large scale excavations started in 1999, a project of co-operation between the University of Tromsø, Institute of Archaeology and the Viking museum at Borg. The main goal of this project is to investigate settlement at Borg from pagan times towards Christianity.

Project leadrer Brit Solli(University of Tromsø) has been working out some of the results:

Borg III is a longhouse, measuring about 35 x7m. The wooden posts that were standing in the wall, seem to have carried the roof. Two entrances were discovered being a part of the western stonewall. Smaller rooms were added to the house later.

The barn was probably situated in the northern part of the house. This area contained 5 cooking pits and several sherds of pottery. The settlement activity is about 2000 years old, but the house remains were probably in use from AD 1000-1200. Some finds from the Viking Age are also present.

A report from these excavations will be finished after analysing the finds, probably in 2005. The project is also part of student thesis at the University of Tromsø.