The island of Vestvågøy contains almost 950 burial mounds from Iron Age. The structures form several types, such as burial mounds built of earth, cairns and flat graves. The conditions of preservation, as well as plundering and modern disturbance are the reason why the most of the burials are invisible. Still, the cairns are more visible, and have the range from 4 to 10 m in diameter and 0.5-1 m high.

One type is the boat-shaped burial mounds, while other kinds are rectangular and star shaped. The star shaped cairns are rather rare, but one example still exists at Moland. Some burial mounds with single upright stones are preserved and situated at Malnes, Moland, Holsøya and Horn.

The burials often contained a wooden cist, or the dead person might be placed in a pit. Some burial mounds actually contain a boat where they have placed the dead and the local site at Nykmark gives clear evidence of a boat burial. Boat-nails can be well preserved, and gives us an impression of the Iron Age boat type.

During the Iron Age an increasing amount of iron artefacts appears in the graves.

House sites from the Iron Age can be recognised by remains from the stone and turf walls. Modern farms are mainly situated in the same area as the Iron Age farm, which make it difficult to recognize traces from earlier settlement. Both farming and building activities have a rather large impact on the archaeological remains.

One method to trace the early farms is to open trenches over huge areas. By doing this, traces of the buildings themselves can appear, through postholes, fireplaces or traces of walls. Full scale excavation is the next step to reveal the actual possible structure, where finds of fireplaces, entrances and artefacts can be recovered. These kinds of structures can reveal information about earlier buildings and past society in general.

The definition is based on farms situated at a topographical and geographical distance from modern farms (historical farms), in outlying fields. Deserted farms can be complex, consisting of burial mounds, boat-house foundations, house sites, traces of fields and stone fences.

This means an Iron Age farm site, close to the modern (historical farms) or medieval farm. Traces of settlement can often be traced back from prehistoric to modern times, often preserved by thick cultural layers.

In total, 19 court sites are known in Norway. One theory interprets the structures as quarters for the Chieftain's army. The Court sites consist of 4 to 16 house sites forming a courtyard. In Northern Norway, 11 court sites are found and 3 of them in Lofoten: one at Gimsøya and two at Vestvågøy. At the Bøstad court-site, 4 houses can be still be traced, while a modern road has destroyed the remaining part.

Dating of the court sites indicates activity in the time-span between 200 AD-1000 AD. In Northern Norway some of these sites seem to have been used both in the Early and Later Iron Age period. In South Western Norway court sites seem to be dated mainly to the Roman period. As mentioned the function and use of these sites is debatable, but one accepted interpretation is to see them as an important part of the chieftain's organisation. 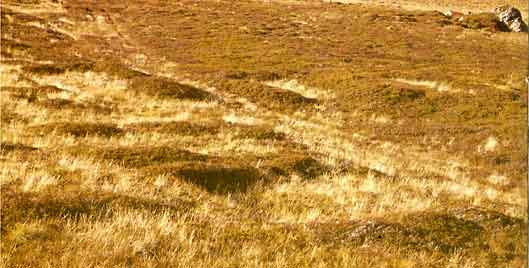 The remains of the court site at Gimsøy can be seen in the foreground
as heaps in the landscape. Photo: Lofotr, the Vikingmuseum.

As many as 1500-2000 farm-mounds have been registered in Northern Norway. The structures are mainly to be found in this part of the country. The structures appear as thick cultural layers, representing huge mounds at or close to the modern or historic farm. The cultural layers have accumulated through the centuries, the farm-mound at Bleik, Andøy in Nordland County dates back to around the year 0. The different layers consist of building remains, turf, waste disposal etc. 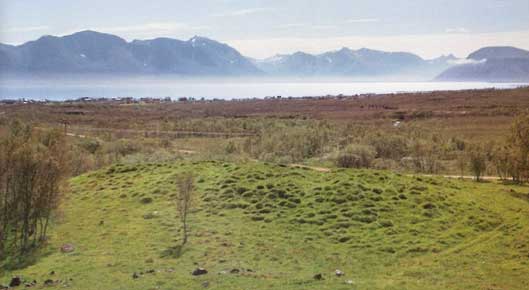 The farm-mound Dungan at Andøy in the middle of the picture.
Photo: Lofotr, the Viking Museum

The pits are dug for the purpose of burning wood into charcoal, and are seen in connection with iron-production and blacksmith activity in prehistoric times. Today you can see pits of different size and shape in the ground, mostly in outlaying fields, often as small, preserved turf dwellings. The pits could be situated singly or seen in groups in the terrain, and most date from the Early Iron Age up to the 12th century.

Cooking pits are related to pits for food preparation. Today we can see the remains slightly visible in the ground, and the structures often contain remains of charcoal, heated sand, and pieces of bone. Some of them are without remains of bones, and are interpreted to have special purposes. The structures can sometimes be found close to prehistoric burial mounds and cemeteries. Did they serve special purposes during burial ceremonies? The dates are rather scattered, some going back to around year 0, while some are used throughout the Iron Age and Medieval Times.

Boat house sites are remains of prehistoric boat houses, often situated close to the sea, rivers or lakes. The structures appear as heaps of turf and stones, and excavations reveal information about boat types from the Iron Age. At Vestvågøy 24 boat house sites date back to Early Iron age. From Later Iron Age, about 33 sites are known, and 6 from the time span between Iron Age and Medieval Times. At Vestvågøy a rather large collection of boathouse sites from Iron Age exists. 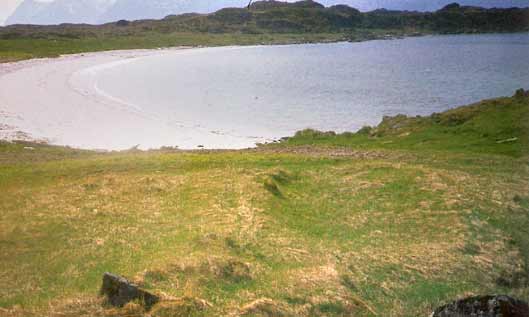 In foreground you can see the characteristic boathouse of Hov, Gimsøy.
Photo: Lofotr, the Vikingmuseum.