Excavation Details
Excavations here in 1904-5, 1925 and 1980-1 showed Dunadd's central importance in 6th-8th centuries AD with its domineering architecture and rich goods imported from Britain and the Continent. There is evidence for metalworking and for ecclesiastical influence. Rock carvings suggest it may have been where early kings were inaugurated. 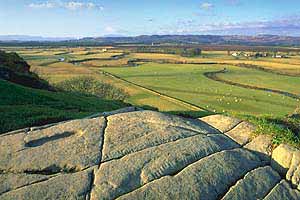 Description
Rising out of the Great Moss, Dunadd, worn down by successive ice-ages, stands sentinel as the River Add snakes around its feet. Since prehistory, people have been drawn by its powerful setting and have left their marks: the footprints of the Dalriadic Kings, the carved wild boar of the Picts, enigmatic messages in the early Celtic script - subtle evidence of comings and goings, feuds and unions. It was here the Scottish nation was born.

Dunadd rises out of the flat flood plain, the undrained portion of which is still raised bog (Moine Mhor) which can be seen by the dark vegetation in the distance. The River Add can be seen meandering towards the sea at Crinan. The island of Jura and Scarba can be seen on the horizon.

Access/Ownership
The site is managed by Historic Scotland with free access from dedicated car park close by.

Check out the following sections of the website for related information