The conical peak of Croagh Patrick has been for millennia the focal point for ritual and pilgrimage stretching back possibly to before the Neolithic period. The mountain dominates the Mayo landscape. Imagine the effect of the 'roof of the world', 'the stairway to the heavens' vista, would have had on many generations. Indeed, many generations have sought to venerate this quartzite mountain space for diverse reasons. 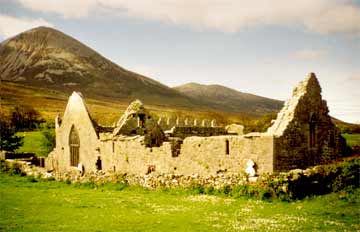 Remains of Augustinian Friary with Croagh Patrick in the background

Today thousands of pilgrims traverse, some barefoot, the difficult terrain of this holy mountain on their annual pilgrimage to the summit to beseech the almighty for whatever personal intentions they might have or equally just to enjoy the amazing Clew Bay landscape. 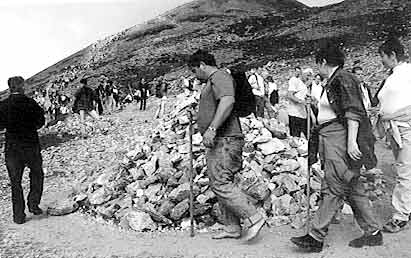 It has been the same throughout the millennia when pre Christian people travelled the same landscape in search of their own particular divinity.

Pilgrimage to a number of these holy places in Ireland represents a living link to an ancient past, a past filled with venerated places such as wells, trees and mountain tops where pagan spirits dwelled until subdued or adapted by the Christian newcomers.

Croagh Patrick had its own protective god Crom Dubh who dwelled near the mountain. Crom Dubh is a pagan god who owns a bull, a granary of corn and is ruler of the elements. There are many stories of how St Patrick in his mission to bring Christianity to Ireland had to do battle with the powers of gods such as Crom Dubh. These battles are the later hagiographers, versions of the fight between the pagan gods and Christianity for supremacy, a power struggle in the shadow of a power centre.

It is argued that the religious importance of Ireland's holiest mountain has its roots in the Celtic festival of Lughnasa. Lugh was the god of the Túatha De Danaan, he was the Ollathair, the all-father god, the sky god, and Celts believed that they were physically descended from the sky god who was himself descended from Danu (divine waters). He was regarded as the ancestor of several ruling Irish Túatha. Lugh initiated the harvest festival that was originally celebrated at the grave of his mother or wives. Therefore, it would have been extremely important to honour such a god. Lughnasa is on the first of August and today Christians from around the world ascend to the peak of Croagh Patrick just before that ancient date. 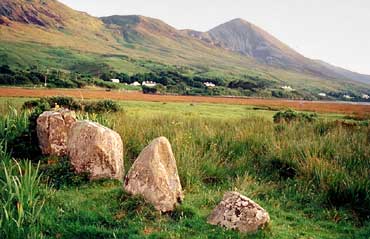 Archaeological research suggests that Croagh Patrick was a powerful religious focus since the Bronze Age. At the standing stone complex at Kiladangan it was discovered that the stone row is aligned on the setting sun of the winter solstice, which sets within a niche in the eastern shoulder of the mountain. At the isolated rock outcrop at Boheh, where there is one of the finest examples of rock art in Europe, the setting sun can be seen rolling down the shoulder of Croagh Patrick. These striking events would have been observed and marvelled at by prehistoric farmers with an acute sense of their environment and concerned with astronomical events, which could affect or damage their livelihoods.

Did the ancient peoples venerate Croagh Patrick as the residence of a deity who had the power to control the elements, or was there a more economical reason for the focus on the mountain. It has recently been shown that a narrow interrupted reef of rock, containing gold in sufficient quantity to make its extraction profitable, runs from south -west Scotland across the north of Ireland to reach the Atlantic coast not far from Croagh Patrick. However it has been argued that prehistoric mining techniques were not capable of exploiting this resource. The name of the river Abhainn Buí, yellow river, which rises on the south west of the mountain, suggests that perhaps there was an awareness of how to exploit these resources. The lack of gold artefacts from the immediate area could be explained in terms of trade. Perhaps the rights to exploit the area's resources were traded to outside producers who would have needed access to the raw material. 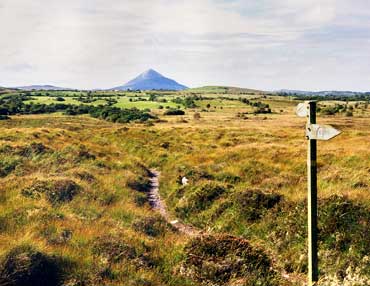 Was the ancient pilgrim route of the Tóchar Phádraig used for more than the transport of pilgrims? Was it a trade route between Croagh Patrick and the royal site of Connaght at Cruachain and beyond?