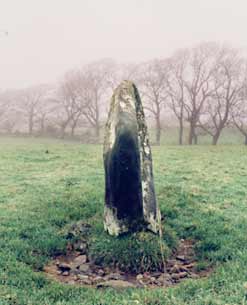 Standing stones are among the most numerous of the monuments in the area of Croagh Patrick. Generally considered to date from as early as the Bronze Age it is not known when the practice of erecting stones discontinued. Standing stones have a suggested wide range of functions such as burial markers, ritual or ceremonial function, astronomical significance, as in stone rows or alignments, or used as ancient boundary markers. Any or all of these might well be the reason why people erected such monuments.

In the early Historic period standing stones were used in some of the rites associated with the inauguration of a king. They were looked upon as phallic symbols and the king who was a quasi-divine underwent a symbolic mating with an earth goddess in order that the land would be fertile.

Near the N base of Croagh Patrick close to the shore of Clew Bay there is a three stone row alignment. The stone row is aligned ENE-WSW. The particular stone (56) that is featured here is the most easterly positioned of the three. It stands 1.35m in height and is 0.28m thick with a width at the base of 0.7m expanding to 1.5m further up.