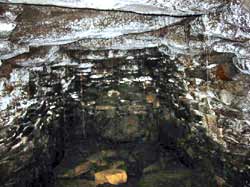 Description
A souterrain with dry stone walling occurs within a stone cashel at Durless (Corlett, 2000). Durless translates as strong fort (Morahan, 2001). The nearly circular univallate cashel with later stone work on top has internal diameters of 20m. The construction, where visible, is of small irregular schist flags (Morahan, 2001). These cashels are derivatives of the local geology where the ringfort is constructed using stone rather than earth for the embankment.

The souterrain is 7.3m long and runs beneath and outside the NW area of the cashel wall. The word souterrain is French in origin, sous (under) and terrain (ground). They can be referred to locally as 'caves' and are denoted in Gaelic with uaimh and óin (Clinton, 2001). These chambers were often designed with ventilation shafts and elaborate obstruction features where the occupants of the cashel could find temporary refuge during a raid (Edwards, 1996). In more stable times they would perhaps be used as places of storage for food. (Barry, 1994)