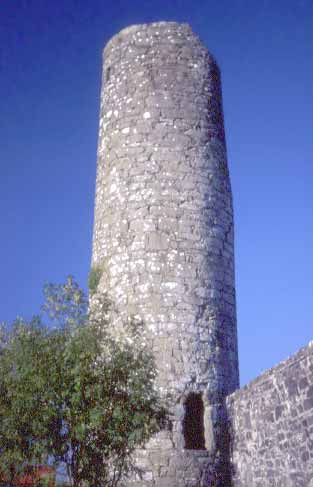 Description
The church at Aughagower is mentioned as early as 700 AD by St Patrick's biographer, Tírechán. It was reputedly founded by St Senach in the seventh century. The name arrives from the gaelic, Achaidh fobhair meaning 'field of the spring' (Corlett, 2000). Nearby are Tober na nDeachaun translated as 'well of the deacons' and Dabhach Phádraig, 'Patrick's bath'. Inset into the wall of Dabhach Phádraig is a sheela-na-gig, a medieval symbol which would have been placed in a very accessible part of the church walls (Corlett, 2000). This small explicit carving of a female showing her genitalia is a medieval symbol which has primitive roots.

The pilgrim road from Ballintubber passes this church site on its way to the mountain. The only trace of the early church is the remnants of the west door which was incorporated into the later building. West of the church is the remains of a much damaged and repaired round tower with a base diameter of 5m and reaching a height of almost 16m. The tower has suffered the ravages of fire as the evidence from around the doorway indicates; evidence perhaps of the unreliability of these freestanding constructions as places of safe refuge (Lalor, 1999).