Much is made in popular literature of the 'monastic' character of the early medieval church in the Celtic world.

At first sight this seems to be true of Scottish Dál Riata, given the enormous importance of Iona. This was a great monastery where monks under the leadership of Columba established their community in 563 AD.

It lasted for a thousand years as a monastery, until the Reformation in 16th century.

No one can dispute the importance of monasteries in the Celtic world, surely, or further south in the Anglo-Saxon church for that matter. They were landowners on a huge scale, and did much to transform the landscape of the medieval world. They were also able to have great cultural and political impact, given their wealth and prestige, so they often appear on our radar screens of 'historically visible' events.

Furthermore, many of our records of the early medieval period were actually written by monks in the first place, which must influence our perception of their importance. Our best annals for Dál Riata in this period, for example, up to the year 740 AD or thereabouts, are the entries in the Annals of Ulster which were apparently recorded in Iona.

When Columba came from Ireland to Scotland to found a monastery, he came to an already Christian Dál Riata. There was a Gaelic church there already, and if there was a church there must have been books, altars, priests - and at least one bishop available to ordain them - and all the rest of the necessities of church life to ensure preaching, baptism, communion, prayer and burial of the dead. These were the functions of the bishop and his clergy.

Certainly the monastic churches provided clergy for pastoral purposes, too, but the church laws of the time stress the role of the bishop in the provision of pastoral care. And in the density of ancient churches scattered round the landscape, we can see the remains of the pastoral provision of the church, some of which must have had nothing to do with Iona. The material evidence for some of these churches is now lost, except for the name of places with a Cill element - the Gaelic word for 'church' - which appears as 'Kil' in Anglicised place-names.

This map gives a good impression of the number and density of churches around Kilmartin. 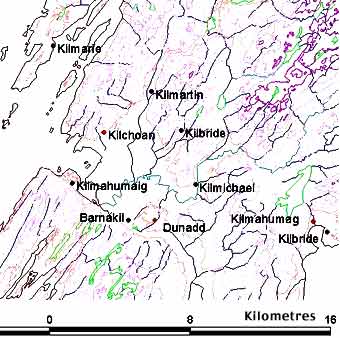 The distribution of Cill -names in Mid-Argyll shows that there were at least nine churches within 12 kilometres of Kilmartin. No one had far to go to church.

In these circumstances, the whole landscape took on a sacred character, dotted with places of prayer and worship. There were no doubt other places with a sacred meaning to the inhabitants - holy wells, places marked with a cross, and so on - which are lost to us now.

These churches might not have amounted to much, architecturally speaking. In the first millennium the majority of such churches in Argyll would have been made of wood, and very little survives. Surviving place-names and sculpture, however, speak of a rural population well provided with pastoral care.