Just as Dunadd seems to have been a royal power centre of Dál Riata, so the island monastery of Iona was the centre of church influence from the middle of the first millennium.

Founded by the Irish saint, Columba, in the year 563, the monastery began as a gathering of small wooden buildings on the east side of the island. Archaeology has revealed the location of the monastery, and some of its features, including a large vallum or perimeter wall. Many centuries later, on this site, a large stone monastery was constructed. 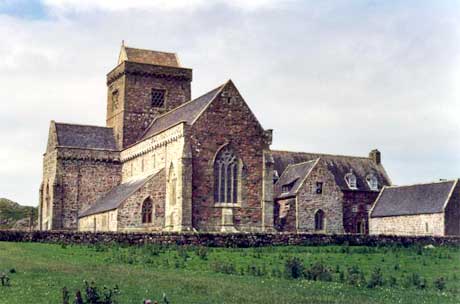 The church of Iona as it stands today, much restored in the 20th Century.

We know more about Iona than almost any other insular monastery of its time, not just because of archaeological research, but because Iona monks left a great deal of writing. By combining archaeology with the study of Iona writings, we can build up a detailed picture of the monastery, its way of life, its religious, social and political activities, and even its beliefs and ideas.

The literature from Iona includes several poems thought to have been written there; a chronicle kept on the island up to about the year 740, which was later copied into the important Annals of Ulster; and a collection of Irish canons governing church and society which was probably made on the island in the early 8th century. But the most important material of all is the writing of Adomnán mac Rónáin, the ninth abbot of Iona, who died in 704. He it was who wrote a book On the Holy Places, an account of the Holy Land which is a sophisticated work of scriptural scholarship, in which difficulties in understanding passages in the Bible are resolved by studying geographical information about the area. Adomnán also wrote and promoted a law for the protection of women, the Cáin Adomnáin ('Law of Adomnán'), also known as the Lex Innocentium ('Law of the Innocents').

But as a source of information about the early monastery, Adomnán's Life of Columba is without parallel. Here we see the daily life of the monks, working in the fields, praying and singing in the church, studying, welcoming guests, supervising penitents, dealing with kings and warriors, sailing to and from Ireland, and much more.

By the time Adomnán was writing, however, Columba was a hundred years dead. Adomnán's work no doubt tells us something about Columba, but it tells us a great deal more about Adomnán, about how he saw his world and his role in it. This is often the most useful way for a historian to read Saints' Lives from this period.

Most of the abbots of the monastery for the first century or more were related by blood to the founding saint. He was a member of the very powerful Northern Irish clan of Cenél Conaill, part of the Northern Uí Néill kingdom. The abbots of Iona usually enjoyed close relations with these powerful kinsmen of theirs, who sometimes claimed rule over all of Ireland. Such blood ties helped to raise Iona to be one of the most important churches in Scotland and Ireland, and to have huge influence.

This influence was felt in Ireland, where Columba had also founded other monasteries. It was felt throughout Dál Riata, where Iona had several daughter houses, and where she claimed the right to 'ordain' the kings of Dál Riata. Her influence was felt in the English kingdom of Northumbria, too, where Iona founded the monastery of Lindisfarne. Adomnán also tells us of many monasteries of Iona monks situated in Pictland.

Some of the principal churches associated with Iona family
in the early middle ages, in Scotland, Ireland and England.

Iona, however, was not the only important monastery even in Dál Riata. Others were founded which had no allegiance to Columba's monks, such as the important one on Lismore, one in Applecross and one on Tiree, to name but three. Gradually, however, as Iona's power grew, other churches were rather overshadowed. By the time that Gaelic speaking rulers had seized power in Pictland, the cult of Saint Columba was the most important one of all. And so in 849 AD his relics were acquired by Cinaed mac Ailpín, to give spiritual authority to his new dynasty, and carted off to Dunkeld in the east.

The Vikings devastated Iona in 795, and again in 802, 806 (when they killed 68 of the monks) and 825. It may have been this pressure that forced the Iona monks to build a new monastery in Ireland, at Kells. The building work began in 807 and was finished in 814, when Kells became the new centre for the monks of Columba's family. Iona remained a monastery, and an important one, for kings continued to be buried there, and it continued to produce fine works of sculpture. But it was never again to have the prestige that it had enjoyed during the abbacy of Adomnán.