The Emergence of a Kingdom

The western seaboard of Scotland, together with its islands, formed a part of the Gaelic speaking world together with Ireland and some corners of what is now Wales, before written records began. We don't know exactly how Gaelic came to be spoken here, nor when.

The character of the land here, full of inlets and islands, narrow sea passages and long lochs, allows rapid communication by sea. The area may look fragmented from a land-bound point of view, but from the point of view of sea-going warriors and traders it was a network of connections. It thus lent itself naturally to the creation of a single political territory. 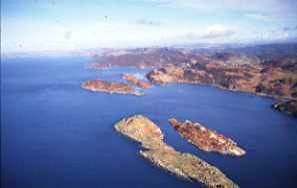 The sea-roads of Argyll - the Kingdom of Dál Riata

As in Ireland, the basic unit of social and political life was the túath, the tribe or people, with its own king, the rí túaithe. But single kingdoms were unstable units and were in constant conflict with their neighbours. Each sought to exercise authority over its neighbours, or to free itself from interference and control by its neighbours. Warfare, cattle raiding, taking of hostages, negotiated settlements and payments of tribute to avoid violence all contributed to the overall nexus of inter-tribal relations.

As one tribe became more powerful than its neighbours, patterns of domination and submission appeared. Over-kings became rulers over several túatha, and the consolidation of larger units, eventually of provinces, created a more hierarchical political map of the Gaels.

We can see this pattern in Dál Riata on the west coast of Scotland. 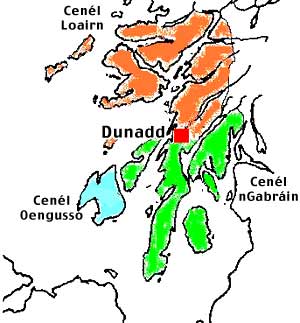 The several cenéla or kin-based groups were united under one overking, usually the ruler of the Cenél nGabráin, though for a while Cenél Loairn held dominance. The kingdom spanned both sides of the North Channel, but in the sixth century the centre of political gravity seems to have shifted to the east, to Scottish Dál Riata. There in the mid-sixth century, Aedán mac Gabráin held the overkingship of all the Dál Riata cenéla. He not only held authority over his own people, but sought to extend his power and influence in Ireland and Orkney, in Pictland and even Northumbria. We do not know with any certainty where his power base was, the caput regionis as Adomnán calls it - (the chief seat of the kingdom,) but the fort of Dunadd is the most likely candidate.

Aedán's aggressive expansionism was not to be maintained by his successors, however. His grandson, Domnall Brecc, was a less successful ruler of Dál Riata, losing several battles and finally allowing his kingdom to become so weak that the Scottish part was made subject to the power of Northumbrian kings, while he probably lost the Irish part altogether. Dál Riata's subjection to Northumbria seems to have lasted from the 630s until the year 685, when the Northumbrian forces were destroyed by the Pictish army at the battle of Nechtansmere.

Perhaps it was during this period of subjection to the English that the Senchus Fer nAlban was written, 'the Account of the Men of Scotland' - a survey of the houses of Dál Riata with a view to the right of their overlord to raise taxes and military-naval levies from them. This may have made done for the king of Dál Riata himself, or it may have been for a Northumbrian overlord. Either way, it manifests the emerging centralisation and control which literacy and a state administration allowed. A king could rule ever more extensive domains by utilising the services of his client lords, of the church, and of the efficient administration of laws, dues and armed levies.

In the year 729 the annals mention Pictish officials called exactatores, presumably royal officials whose job was to enforce the payment of such dues. They were killed in battle by the king's enemies, so clearly such exactions met with resistance occasionally. We must imagine similar officials in Dál Riata, lords in their own right who served their king by exacting wealth from their own clients, taking a cut themselves, and passing the remainder up to the king. Through such exactions of wealth (trickling up) and royal power (trickling down) a king might establish his authority, and perhaps an increasing stability in matters of rule and succession. Something approaching a monarchical state begins to emerge.

In the year 736, King Ungus son of Uurgust (Angus son of Fergus) of the Picts seized Dunadd and devastated Dál Riata. This may have been a terminal blow to the kingdom, weakening it beyond recovery. Little more is heard of Dál Riata in the annals thereafter. By the end of that century the Vikings would come and devastate the area further, destroying much of what remained of the kingdom.