Mid-Argyll Theme - 20
Signum Crucis - the Sign of the Cross

In the first millennium, different ethnic groups in different parts of Europe had their own symbols, their distinctive artistic repertoires and culturally specific references.

But as the millennium progressed, and as Christianity spread, one symbol more than any other became the uniting one around Europe: the sign of the Cross. This became the sign par excellence in every culture as Christian faith gained adherence. It could be carved in a simple linear incision on the living rock, as it was at Barnakil in mid-Argyll in what seems to be a very early occurrence. 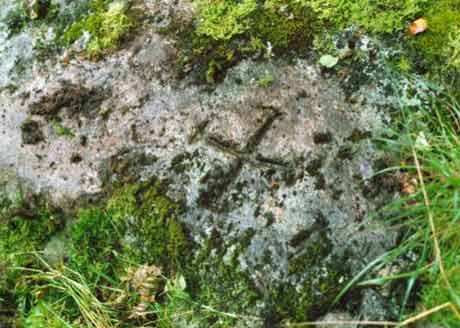 But it could also be used in a wooden cross covered in silver or gold, encrusted with jewels. The jewels and metalwork of such crosses may have inspired the decorative style of the high crosses of stone in later years. Iona seems to have been a pioneer in the development of this style of 'high cross' which then spread all over Ireland, many with the characteristic ring at the head. Decorative motifs gave way to detailed illustrative panels, which had were organised as highly developed theological and spiritual statements.

The cross could also be marked on pre-Christian objects, such as the Torran stone on Loch Awe side.

What did the person who made this cross on the Torran stone think they were doing: claiming a 'pagan' object for Christ, and thereby over-riding its ancient meaning? Or perhaps just as likely, given what we know about medieval religious belief, they were showing that pre-Christian beliefs pointed towards Christ and were fulfilled in him. 'Pagan' ideas were not always seen as opposed to Christianity, but were often regarded more as a preparation for faith in Christ, pointing towards it, anticipating it, even prophetic of Christ's death and resurrection - albeit in ways which the pagans had not necessarily intended.

This was the kind of 'conversion' of the pagan past that Pope Gregory the Great had in mind in when he wrote to Augustine of Canterbury, converting pagan shrines rather than destroying them.

"The temples of the idols among that people should on no account be destroyed. The idols are to be destroyed, but the temples are to aspersed with holy water, altars set up in them, and relics deposited there....." [Bede, Historia Ecclesiastica, i, 30]

A similar attitude to the pagan past was shown by Gaelic lawyers, who taught that much pre-Christian legal doctrine had been inspired by God according to the law of nature. Therefore, whatever of pagan laws that were in conformity with the Gospel were to be regarded as binding by Christians.

It could even be used as a simple physical gesture over one's own body as a prayer for blessing and protection. Here is part of a prayer-poem written by Mugrón, abbot of Iona in the ninth century, and one must imagine him making these signs of the cross over himself as he recited it:

From the tip of my head
to the nail of my foot,
Christ, against each peril
the shelter of your cross.

Till the day of my death,
before going into this clay,
joyfully I will make
Christ's cross across my face.

Check out the following sections of the website for related information