Adomnán mac Rónáin was the ninth abbot of Iona, the successor of Columba or Colum Cille. A renowned scholar, leader of a monastery with a reputation for sanctity and learning, head of a family of monasteries in Scotland and Ireland, he was a man of enormous religious influence.

In addition to his influence as a monastic leader, he happened to be the kinsman of the most powerful man in Ireland, Loingsech mac Óengusso, King of Tara. Adomnán was close to secular power and influence, and he knew how to use it.

But he was also concerned with people who had no access to power. In his Life of Columba he often shows his patron saint aiding the poor and the needy, powerless people in a world where violence was a central feature of political activity.

Most dramatically, Adomnán tells the story of Columba witnessing the murder of a young woman by a 'cruel persecutor of the innocents'. The woman sought Columba's protection, but her attacker slew her with a spear and left her lying at Columba's feet. The saint called on God, cursing the murderer, who he fell dead on the spot.

This is a story about Columba the first abbot of Iona, but remember that Adomnán, who is telling the story, is Columba's successor. When he writes the Life of Columba, he is describing the ideal Iona abbot, and therefore describing his own role. This is a manifesto for himself.

It was a manifesto that he vigorously fulfilled. In the year 697, using all the influence that his position gave him, Adomnán summoned a gathering of kings, bishops and abbots at Birr in the midlands of Ireland. These secular and ecclesiastical rulers came not just from Ireland, but from Scottish Dál Riata, and even from Pictland.

At this conference, the Annals of Ulster tell us, 'Adomnán gave the Lex Innocentium - the Law of the Innocents - to the nations.'

The 'Innocents' in this context were primarily women, but also children and clergy - in other words, people who did not carry weapons, and were therefore 'harmless', the literal meaning of 'innocent'.

The Law of the Innocents bound rulers, secular and ecclesiastical, to protect women from all these dangers. It prescribed the penalties that would be imposed on those who assaulted women, and it laid down the rules for its own administration and enforcement. 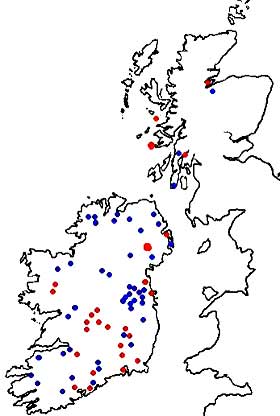 The places of origin of most of the signatories of the Law can be identified,
with varying degrees of certainty - both secular (blue) and religious (red).

Later tradition says that Adomnán used his bell to curse the kings who rejected his law.

The law requires these men to protect the innocent. It describes both the secular fines which criminals must pay and the ritual curses to which they are subject - one of the earliest accounts of such maledictions known to us.

The authority of Iona is invoked constantly, as the ultimate source of this law, and as the monastery which receives the fines from law-breakers.

Here are a few passages from the original text of the Law, to give a sense of its tone and content. 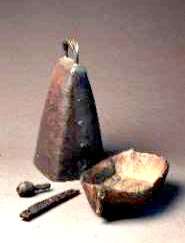 34: The enactment of the Cáin Adomnáin stands as an everlasting law for clergy and women, and for innocent children until they are capable of killing a man, until they have taken their place in the tribe and their first armed conflict be known.

37: These are the judges of the Cáin Adomnáin in every church and in every tribe: i.e. the clergy whom the community of Adomnán shall choose and to whom they commit the enactment of the Cáin

46: If it is charms which one person gives to another which are the cause of another person's death, the fine for it is the same as the fine for murdering someone and hiding the corpse. ... If suspicion rests on two people or a number of people, let their names be written on leaves, each leaf is put in an arrangement around a lot, and the lots are put into the chalice on the altar. The one on whom the lot falls, it is he who is liable to the fine.

The Law of Adomnán is a genuine international law, formulated and promulgated by several nations, and binding on them all. In it Adomnán was giving local expression, in the context of the Gaelic legal tradition, to a wider Christian movement to restrain violence. St Augustine's early formulation of the notion of Just War was part of the same process, in a more theoretical discourse.

The modern Geneva Convention, governing the treatment of non-combatants, stands at the end of a long historical struggle for justice in war - a struggle in which Adomnán, abbot of Iona, played a significant part.