Strange carvings appear on several stones, in a swathe from the south of Ireland, through Leinster and western Wales, right up to the north-east of Pictland.  These notches and grooves are actually a script, a way of writing.  It is a script which appeared some time between the 2nd and 4th centuries, first in Ireland, and later became more widespread, though only in areas of Gaelic occupation or influence.

The script itself consisted originally of twenty characters, arranged in four groups of five letters.  The vowels were one such group, formed by notches placed immediately on the line: A was one notch, O was two, U was three, E was four, and I was five notches.

M, G, NG, Z and R were represented by clusters of scores running diagonally right across the stem-line.

In later centuries a few new characters were developed, but this was the original core of the ogham alphabet. 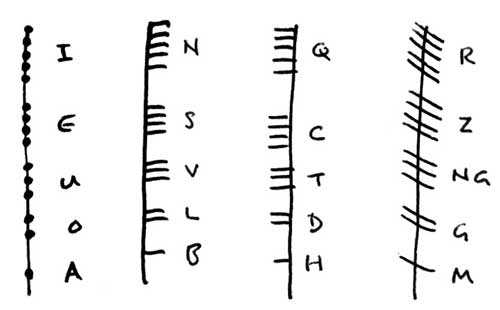 Key to the ogham alphabet

Equipped with this key to the letters, the reader would be able to make some sense of most ogham stones.

Though the ogham writing system is visually very different from our familiar Roman script, it appears to have been partly inspired by features of the Latin grammarians' view of writing.  It is therefore likely that the inventors of ogham had some training in Latin, and that ogham grew up in a cultural milieu where people were already familiar with Latin script.

But it was no mere imitation or cipher.  The ogham writing system was developed by Gaelic speakers to represent the sound-world of their own language.

The writing system was invented in Ireland, and the vast majority of surviving examples of ogham stones are in the south and south-east of the country, and this is probably the area in which it was developed - Munster and Leinster.

This distribution may be significant from the point of view of the influence of Latin grammar on Ogham, since it represents the parts of Ireland most closely connected to the Roman influences of the Continent and of western Britain.  There was also a reasonably well-established church in southern Ireland by the year 431, when Pope Celestine sent Palladius to be bishop there to minister to existing Christians.  And if there was a church there already, there must also have been Latin literacy. 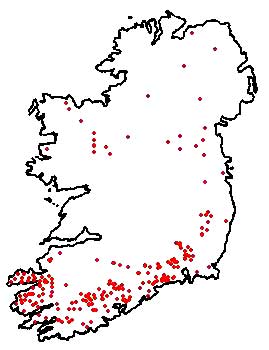 The vast majority of ogham stones in Ireland are clustered around the south and south-east of the country, while in the north and north-east of Ireland they are extremely scarce.

But if Gaelic Scotland was as closely connected to the north-east of Ireland as we know it was,  how did the oghams get into Scotland?  There are three oghams in Argyll.  Was the script transmitted to Argyll from the north of Ireland, where there is hardly any ogham?  Why would men from County Antrim teach ogham to the men of Argyll if they weren't making it themselves?

The situation is further complicated by the fact that there are more oghams in Pictish Scotland than in Gaelic Scotland.  The Picts, in the east, developed ogham as a high-status script on their monuments.   But  ogham is a Gaelic script, and must have been exported from Ireland to Pictland somehow. But Dál Riata didn't make many - only three survive.   So how did ogham get to Pictland?

One possibility is that there was a direct contact, ecclesiastical or political or both, between the ogham-producing south of Ireland and ogham-producing Pictland, bypassing the Dál Riata connection altogether.