The ancient language of the Irish is Gaelic, still spoken by many Irish people as the mother tongue they grew up with, or as a second language that they have learned at school or evening classes.

Something similar is true of parts of Scotland, but in a more complex and puzzling way. In Argyll people have spoken Gaelic since written records of the area first began. The very name Argyll means 'coastland of the Gael' - Oirer Ghàidheal. In other areas, Gaelic appeared at a later date, displacing the existing languages.

The dividing line between Gaelic and Pictish is not the sea, but the mountains of the Scottish Highlands (see map).

But the rest of early medieval Scotland was not Gaelic speaking. To the north and east of Argyll, people spoke Pictish, a language now extinct. To the south, around the Clyde and beyond, people spoke dialects of Brittonic, a language which developed into the language we now know as Welsh. Pictish and Brittonic are closely related 'P-Celtic' languages, distinct from the Gaelic Q-Celtic.

So why was there an early pocket of Gaelic on the west coast of Scotland? What was it that united it to Ireland?

Many have explained these facts by supposing that around 500 AD Gaels from the north east of Ireland, now County Antrim, invaded the west Scotland bringing their language with them. (Ó Cróinín 1995, 18; Dumville 1993, 187). Up to that point, they say, the area had been Pictish or Brittonic-speaking. 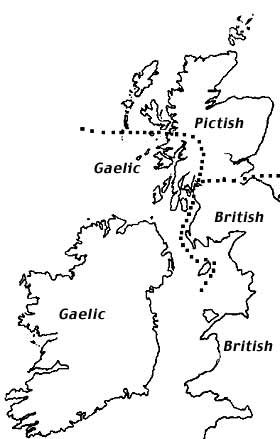 The dividing line between Gaelic and Pictish
is not the sea, but the mountains
of the Scottish Highlands

There are medieval versions of this story, but they were written long after the alleged invasion was meant to have taken place, and they tell us more about the perceptions of 8th and 10th century commentators than about the late Iron Age.

Archaeological evidence casts doubt on the idea of an invasion (E.Campbell 2001). The typical settlement type in Iron Age and Early Medieval Ireland is the ráth or ringfort, earthen banks forming a circular enclosure. There are tens of thousands of these recorded in Ireland, almost all on ground lying under the 750 feet contour.

Not one such fort is known in Argyll. If there had been an invasion of ráth-building Gaels from Ireland into Argyll, one would expect at least some of them to have built the kinds of fortifications they knew how to make. But the Gaels of Argyll make quite different defensive buildings: the dún or hill-fort, with its stone-built walls on high ground. There is no sign of invading Irish architecture in any part of Argyll.

If there was no large-scale invasion, then, perhaps only a few Gaelic war-lords seized power over the existing P-Celtic community in Argyll, ruling thereafter on both sides of the sea. As the élite spoke Gaelic, one might argue, the P-Celtic plebs sought to raise their own status by learning the high-status language of the new rulers. This is the theory of 'élite emulation' for language change.

There are objections to this theory too, however. For one thing, no one can point with any certainty to a nation changing its language by élite emulation in the known historic period. When whole nations have changed their language, it generally seems to have been as a result of violent occupation and destruction.

Both of the above explanations - invasion and élite emulation - rely on the assumption that Pictish or Brittonic was originally spoken in Argyll. But there is no evidence that a P-Celtic language has ever been spoken there.

If we compare the scenario in Pictland, where Gaels did forcibly take over a territory of P-Celtic speakers, we see that many P-Celtic place-names were incorporated into the later Gaelic nomenclature of the territory. For example, the Pictish place-name element Pet-, a word for a settlement, continued to be used into the Gaelic period, and is often found combined with a Gaelic second element, such as Pittenweem, *Pit an Uaimh, where the second element is from Gaelic uamh, 'cave'.

Glasgow archaeologist Ewan Campbell (2001) has suggested that there was no invasion, no élite take-over, and no displacement of P-Celtic. Gaelic appeared in Ireland and in Argyll simultaneously, as part of a single process.

Between Ireland and southern Britain, the sea was a real linguistic barrier, allowing the two different languages, Gaelic and Brittonic, to grow up in two distinct and separate populations.

But in north Britain the sea was not an effective barrier. After all, you can see the Argyll coast and its islands from the Irish shore. In north Britain the main geographical and linguistic barrier is not the sea, but the massif of the Scottish Highlands, a great block of mountains with only difficult passages through them connecting west to east.

The sea on the other hand, far from being a barrier, is a highway between Argyll and Ireland. Constant boat journeys of only a few hours created a tissue of connections between Gaelic speakers on both sides of the sea. In constant maritime contact with each other, people on both side of the sea formed a single linguistic and cultural community.

There is no need for an invasion or an élite takeover to explain the presence of Gaelic in Argyll. It had been a Gaelic speaking area for as long as Gaelic had been spoken anywhere.