One historical event on the 8th of June 793 AD, the attack at the monastery on Lindisfarne in Britain (on the coast of Northumberland), has been said to mark the start of the Viking Age. After this, there were numerous Scandinavian raids on the British Isles.

But some critical questions should be raised in the start: Why have journeys undertaken for trade and experience been described purely as a spate of plundering? Have we uncritically accepted the Anglo-Saxon and Celtic writers' view of the period? Could there be other motives than pure plunder and the hunger for gold and women? Studies of economic, political and ideological motives in Norway and abroad may help us to understand the Vikings. In spite of this proviso, we must also recognise that many journeys were motivated by plunder. Iona was raided several times, for example, along with many other Irish and Scottish monasteries, not to mention attacks on French cities - Rouen in 841, Nantes in 843 and Paris in 845.

There also exists a variety of written sources that inform us about this period, both Norse sources, written during the 11th and 12 century, and foreign contemporary sources with certain information regarding Norwegian conditions and history:

With his victory in the battle of Hafrsfjord (872 AD), king Harald Hårfagre (Harold Fairhair) made great progress in uniting Norway into one kingdom, and according to Snorre's Saga he chose Avaldsnes, on the west coast, as his residence.

Religious thought in the Viking period focused on the Norse mythology of gods and goddeses: Odin was the god of the warriors and battle, of wisdom and poetry. Thor was the god of thunder, and Frøy was the god of fertility, marriage and growing. But a great change gradually occurred in the centuries around 1000 AD. From the British Isles, and from further south in Europe a rumour emerged about a new belief, Christianity. Norwegian settlers elsewhere had also encountered, and sometimes accepted, Christianity. Informal contacts had made it known in Norway itself. Apart from this gradual diffusion, several royal efforts were also made to Christianise the country:

One of Olav's principal struggles was to unite Norway under one ruler, and to keep it united, even when local chieftains sought to assert their independence. At one point Olav had to flee Norway, when the chieftains supported a take-over by the Danish King Canute, and he lived in exile in the Russian town of Novgorod. Olav Haraldsson was finally killed in the battle of Stiklestad in Norway 1030 AD, attempting to regain his kingdom. After his death he was regarded as a saint by the church and even by his former enemies. Today St Olaf's churches are common in Scandinavia, and are even found in Britain.

Symbols were used to express religious belief: the Christians had the cross while pagans used Thor's hammer as their symbol. In some places one can trace a mixed use of symbols, like one artefact from Iceland, interpreted as both a hammer and a cross. Also in England there are gravestones with both Thor's hammer and a cross. On the west coast of Norway stone crosses are situated on the top of heathen burial mounds. One example is at Jæren (Rogaland) where the old "Tinghaug" which originally was made around 450 AD is situated. The buried person was a rich woman, equipped in some luxury. Five hundred years later a stone cross was raised on the mound, and thereafter the heathen grave-mound is known as a cross-mound, symbolizing a new time, a new religion, a new social organisation. Sixty such crosses are found in the three counties on Norway's west coast: Rogaland, Hordaland and Sogn og Fjordane, and obviously influenced by similar crosses in England, Scotland and Ireland. 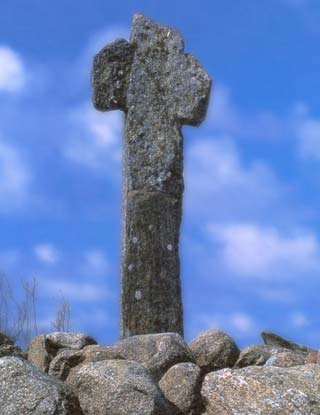 The old pagan "Yuletide" was a mid-winter feast which became associated with Christmas. In Norway we still use the word "Jul" for Christmas.

The rites used in spring to ensure fertility were transformed by the Christian priests - especially with Easter, which celebrated the triumph of life over death. But even Christian farmers (and their priests) continued to pray for fertility, and some continuted to observe a few of the old rites just to be sure. Each Viking farm had its own "farm-god" or "protector", in modern Danish and Norwegian called a "Nisse" and in Swedish a "Tomte". The modern Santa Claus merges the Christian Saint Nicholas with the Nisse/Tomte. On Christmas Eve the children in present-day Scandinavia wait for Father Christmas, or as they call him, the Nisse or Tomte, to arrive with gifts.