The prehistory of Northern Norway is usually divided into Early Stone Age, Late Stone Age and Early Metal Age, and the periods are characterised by the use of different technology and the presence of different forms of social organisation.

The traces of settlement are mainly situated in areas with access to the ocean from several sides. Most sites are open settlements without obvious visible structures, sometimes tent-rings and foundations for shelters are found, indicating movement between different sites. As the ice retreated, new areas seem to have been more attractive. The earliest dwellings are vague and without clearly marked walls, an indication of high mobility.

Later the dwellings increase in number, size and visibility, a result of more sedentary lifestyles. The house types reminds of traditional Sámi earthen houses, with walls of turf and a central hearth. During the Stone Age people lived in small tent-like houses, caves and huts.

In the period between early melting and complete disappearance of the glacier the landscape was open, and the vegetation was characterised by small bushes, shrubs and grass. Eventually small forests of birch started to form, and from 6 500 BC also pine grew at sheltered places. Between 7 000 and 3 800 BC there was a period of warmer climate with median temperature 1,5 - 2 degrees C higher than today. 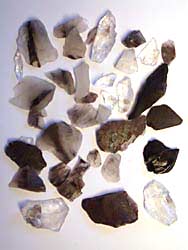 The main archaeological material is stone tools and remains from the production of those. (Stone tools like arrowheads, spearheads, knifes, scrapers and axes). Local stone types have been preferred, like quartzite, rock crystal, chert and white quartz. A small amount of flint is found (imported). The tools were of similar shape and function, but the raw materials differed over distances.

The coast of Northern Norway has been settled from the earliest periods until today. However, who these people were and where they came from is uncertain. Two theories have been put forth: the people came from the east, or, the people followed the ice-edge northwards as the glaciers withdrew from the coasts. The oldest remains of human culture seem to trace back to Early Stone Age, probably around 10 000 BP, but appears both in the north and the south. Still researchers discuss whether the immigration to Norway came from the north or the south, and proof of early man exists in both areas.

Artefacts and dwellings in this part of the country inform us that through all ages people have been in close contact with other groups of people. Trade relations and social relations have encompassed large areas. The presence of tools used in the hunting of sea mammals, indicate the importance marine resources had for people also in prehistory.

Several changes took place during the change between Early and Late Stone Age, among them the technology for the production of tools. Pottery becomes a part of the archaeological material.

After living by hunting, fishing and gathering, people start to keep animals and cultivate barley around 4000 B.C. The organisation of settlement is changing and the construction of buildings develops

Still the rising of the land continues and the shoreline is falling, though more slowly than earlier. The warm period towards the end of the Early Stone Age ceases around 4000 BC, and the climate is gradually cooling during the Late Stone Age. As a consequence, a de-forestation takes place in the outer coastal areas. In the north the large forests disappear, and around 1800 BC the vegetation is approximately like today. A further consequence of harder climatic conditions is that resources like elk and reindeer become more unpredictable. On the other hand, marine resources are more stable.

New raw material is taken into use, like in the north where slate is frequently used in this period. Chert and finer quartzite are replaced by more coarse-grained types of stone (coarse quartzite and quartz). New techniques developed i.e. techniques for grinding and pressure flaking. Excavations show that slate seems to have been more in use at the coastline than the interior. Slate tools are often used in connection with hunting of sea mammals like seal and whale. From this period we have found quite a lot of artefacts made of bone and antler: fishing hooks, harpoons, needles, combs and awls.

In the north, a number of dwellings tell about life in the Late Stone Age. The houses vary in size, and there is a sedentary pattern of settlement, with movement between interior and coast. The transition from Late Stone Age to Early Metal Age is characterised by a strong dichotomy between (semi) sedentary coastal groups and mobile interior groups.

Check on the following sections of the website for related information: