How did the landscape around Kilmartin acquire its present form? It is a kind of palimpsest - a manuscript on which every new text written by the past has left its mark. Its present appearance is the result of a series of dramatic events over the last 10,000 years, brought about by climatic change and by human hand.

At the end of the last Ice Age, about 10,000 years ago, the glaciers began to retreat from Kilmartin. They had arrived from the north down Loch Awe to a southerly limit around Ford. As these glaciers shrank back a great river of meltwater flowed south down the Kilmartin valley and out to the sea, past Loch Crinan. These waters deposited banks of glacial till and gravel along the valley sides to form flat terraces, like the terrace where Kilmartin village is perched today.

Kilmartin village sits on the gravel terrace above the valley floor

As the glaciers retreated, the land was no longer held down by the weight of ice, and it began to rise again. Now, to run out to the sea, these huge meltwater rivers had to cut a valley through their own terraces.

Today, however, no great river flows down from Loch Awe, past the village of Kilmartin. The tiny stream that now runs here looks remarkably out of place in the wide Kilmartin valley. The water from Loch Awe now flows east at its northern end through the Pass of Brander.

Plants moved to clothe the bare bones of this ice-sculpted landscape as the climate warmed. The first to arrive were tundra species such as bearberry and juniper, followed by birch. Woodland diversified and expanded as climate continued to warm until about 5000 years ago, when the hills of Kilmartin were covered with oak, elm and hazel woodland.

Up to this time, people had been living as hunter-gatherers in a semi nomadic lifestyle. Argyll and its islands would have been a generous landscape for them, its woodlands providing edible plants and game, its rivers and lochs filled with fish. In Kilmartin, there is scattered evidence of these people, in caves where they stayed and on islands where middens, their rubbish heaps, hold fragmentary evidence of their lifestyle and diet.

However, this is the point, about 5000 years ago, when human activity starts to etch real marks on Kilmartin's landscape. From within the oak woodlands, humans started to make small clearings, designed perhaps to concentrate game and encourage the growth of edible plants like hazel, bramble and nettle.

Although this phase of activity was lost from the landscape record when the woodland disappeared, the next stage left permanent marks. On suitable ground, people made clearances for agriculture. Larger areas were cleared for farming and herds of animals grazed the higher hills. Along with this change to farming was the construction of the prehistoric ceremonial monuments for which Kilmartin is renowned, the linear cemetery stretching the length of Kilmartin, the standing stones at Nether Largie and the henge at Ballymeanoch. All are likely to have been built in a cleared landscape where impressive monuments could be seen from a distance.

As metal working technology improved, the farmed landscape was developed and clearance of the woodlands continued until, by the start of the first millennium AD, much of the Kilmartin valley was open, cleared by humans. Meanwhile the thin covering of peat grew deeper, assisted by the change to a cooler and wetter climate.

This was the time of Dál Riata when mid Argyll was a centre of power, rich and busy with trade. From here the landscape story becomes more familiar as we enter the history books. The landscape changed once again dramatically as a farmed landscape, peopled with small and scattered settlements, gave way in the 18th and 19th centuries to sheep farming. Wealthy landowners forced thousands of people from their lands and homes in 'the Clearances', so that many of the glens were severely depopulated to make way for sheep, and many of the cleared families left Scotland for good. 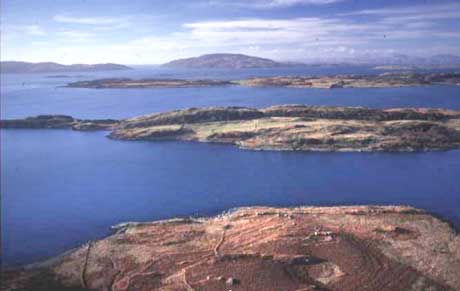 As people and communities made way for sheep, the peatlands around Dunadd were drained and much of the peat dug away, revealing for the first time in many centuries some of the pre-historic monuments. The landscape remained open but increasingly dominated by rough pasture and encroaching bracken.

Economic interests still re-shape the landscape here. One important prehistoric site in the valley, including the remains of a large henge monument and several burials, was recently destroyed by a large gravel quarry.

The arrival of commercial plantations of sitka spruce cloaked the hillsides in blue-green, then as the trees mature and are clear-felled the bare bones of the hillsides are exposed once more.