The study of the past involves many techniques and skills all designed to enable us to glean as clear a picture of the past as possible. Most are directed towards the immediate top surface of the earth but other techniques take a deeper look beneath the ground to explain or at least to add to the knowledge base of how people interacted with their environment in the past. Paleoenvironmental studies provide the environmental context for this.

Brackloon Lough in Brackloon Wood situated on the foothills of Croagh Patrick and Lough Fark in the hinterland of Mayo Abbey are two sites in Mayo where pollen analysis reveals some very interesting data in terms of the first millennium AD.

Pollen data from both sites indicates that people have been active in these areas for millennia. Indeed a minor peak in plantain grass occurs at Brackloon at c.5580 BP marking perhaps the arrival of the first farmers to the area. However, there is no significant Neolithic activity in the Mayo Abbey landscape at this time. The first forest clearances or Landnam event noted in the Mayo Abbey landscape is in the Bronze Age, when trees are cleared for pastoral farming.

Between c. AD 1- 400 we see regeneration of forests at both sites as farming activity slowed or even ceased and population was in decline. The slow growing elm and yew increased and this is significant in terms of Maigh Eó the 'Plain of the Yew' that gives Mayo its name. Both sites experience this 'Iron Age Lull', which sees the decline in the occurrences of plantain grass as partial regeneration of local forest took place. This situation is replicated in several sites around the country. 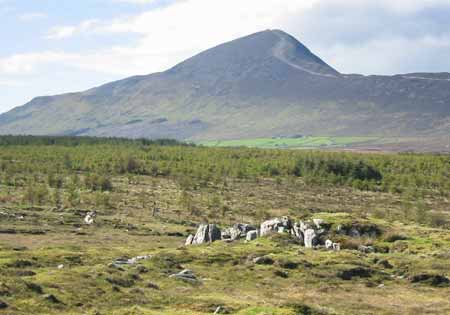 An intensified period of land use is noted in the Early Christian period as the levels of grass pollen rise. This is also the period of the raths, cashels and ringforts. In the Brackloon study there is a noticeable lack of cereal pollen in the analysis, indicating that these farmers under the shadow of the Croagh Patrick were more interested in the rearing of animals. In the Lough Fark pollen study the opposite seems to be true in that there is an apparent expansion of arable farming and in particular the cultivation of cereal rye close to Lough Fark. The emergence of this type of farming activity seems to correspond with the establishment of the monastic settlement at Mayo Abbey in c, 670.

The increase in population and the influence of monastic settlement had an impact on these Mayo landscapes in the Early Christian period. The establishment of the Anglo Saxon monastery in a largely pastoral landscape gave rise to alternative components of the agricultural economy for the first time.

The landscape around Mayo Abbey still bears the hallmarks of this activity with its large areas of open grassland and bogland with only remnants of woodland cover remaining. The landscape at Brackloon however, has reclaimed its woodland mantle as the forest there, left to its own devices and without the interference of man, has regenerated itself.

Perhaps the different approaches to farming in these two Mayo landscapes in the early part of the first millennium had a profound effect, which resonates to the present day.