Rock art is an enigmatic form in many parts of the world, but nowhere more than in the British Isles where it is composed of a miscellany of apparently abstract curves, hollows, rings, spirals, combined at some sites into impressive tapestries of design.

Kilmartin is distinguished by a marked concentration of rock art sites, carved and used from at least 2500 to 1500 BC. The Kilmartin carvings include some of the most extensive rock art panels in the British Isles as well as huge numbers of less intricate sites. Even today new sites continue to be recorded and many more are known by local people.

The cup-and-ring marked rocks are part of an artistic tradition that embraced sites in western Scotland, Ireland, Northumbria and Galicia in Spain. Some forms, however, are unique to Kilmartin, such as the images of early Bronze-Age style axe-heads carved on cist-slabs in the linear cemetery. 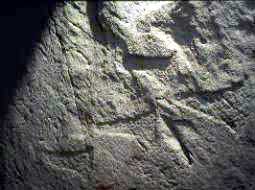 Axe head shapes are carved into a rock in the Ri Cruin cairn.

Such art is part of an even longer tradition, however, both abstract and figurative. Think of the much earlier paintings of animals at Lascaux in France, and Altimira in Spain, the carved animals in Val do Côa in Portugal, or the carvings in prehistoric Scandinavia and the Alps, depicting hunting, farming and ritual in everyday life. The rock art of Kilmartin then sits in a wider context of prehistoric art but its relation to these other artistic movements is obscure, and their enigmatic messages are still far from understood.

Much work has been devoted to the rock art of Kilmartin, particularly in trying to decipher its meaning. The research has included recording the art on panels, hypothesising about its use and studying the art as part of its prehistoric landscape. This approach is yielding some interesting results at Kilmartin.

Of the larger and more complex panels in Kilmartin, the rock art is carved on gently sloping rock slabs, usually on a hillside above the valley floor. These slabs are marked by glaciers, with striae dividing the panels into sections and are all in locations with commanding views.

One problem with the approach to interpreting rock art as part of the wider landscape is the fact that the landscape has changed so much since the art-works were first carved and used. However, pollen analysis, a technique that enables us to reconstruct past vegetation history, is now starting to indicate in some ways what the prehistoric landscape may have looked like. At sites now surrounded by sitka spruce there may have been avenues and sight-lines to distant horizons; at sites surrounded by moorland and grazing today views may have been restricted by trees and strategic clearings. Standing at these sites today, perched on valley sides, it is clear that from a distance they are not always easy to spot. Without the modern signposts, many rock art sites would be missed by today's visitors. 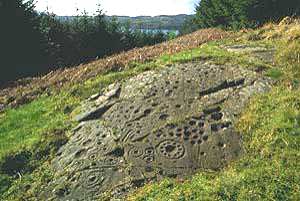 The Ormaig carved stone in situ

Given these circumstances then, how was rock art used in prehistory? One theory is that rock art panels were located at junctions in the landscape and marked pathways through it. Cairnbaan and Achnabreck illustrate this possibility wonderfully. Both are situated on valley sides overlooking the 'road-junction' where the path down Kilmartin valley meets the path between Loch Gilp and Loch Crinan. If people were walking to and from the ceremonial centres in the Kilmartin valley, then this was an important junction.

Pollen analysis has suggested that when the rock art sites are thought to have been in use, the dry valley sides were covered in oak and hazel woodland with a fairly open canopy. Travel through these woodlands would have been possible, pleasant even, along meandering pathways. It may be that the pathways themselves were crucial because without them it would be difficult to find low carved stones among the trees.

Another interpretation suggests that the rock art panels were restricted in their use to a select few, who had been trained to use and interpret them. Whatever their use, some knowledge or signposting is likely to have been necessary to find them.

Like the more obvious monuments in the valley - cairns, henges and standing stones - these carved rocks must have intrigued the farmers, fishermen and warriors who lived here in the first millennium AD. Did they encourage people to invest this landscape with sacred meanings as some do for their own reasons today? Did they also ask themselves what the patterns meant, and find them useful as signs of power in the landscape to validate their own social and cosmic order? 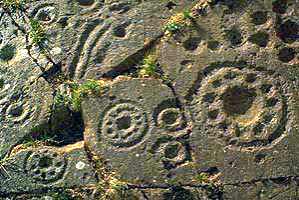 A detail from the large carved rock at Ormaig

What do they mean? It is still impossible for us to say what they meant to the artists who made them. But their enigmatic motifs have the power to engage our minds and imaginations, and that is an important part of their value today.

Check out the following sections of this website for related information