The Island of Selje is situated in Nordfjord, south west of the Norwegian coast. The area is considered as important for the early Christianization in Norway, with a monastery and a status as a sacred place as well as an Episcopal residence. 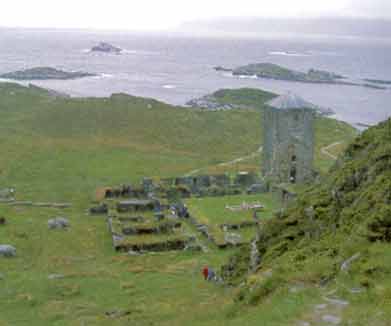 Selje today. (Ruins of the monastery and Church tower by the Norwegian coast).
Photo: Gro Steinsland 2002

We know several stories about St. Sunniva from both Latin legends, descriptions from Monks and Olav Trygvasson's Saga. According to the Saga, St. Sunniva's remains and relics were discovered by Olav Trygvasson at Selje during his missionary travels around the end of the 1000th century.

Sunniva was the daughter of an Irish King who inherited her father's land about 950 AD. Later, a heathen chieftain sought to marry her, and Sunniva and her people escaped by boats. With neither oars nor sail, they trusted in God, and according to the Saga they landed at Norway on the Island of Selje. The grouped lived here until Håkon the earl of Lade entered the Island. Hiding in a rock shelter, Sunniva prayed to God for protection and prayed for the mountain to collapse. The mountain collapsed and the earl and his men went away.

It is said that the King Olav Trygvasson came to hear of strange happenings at the Island of Selje. When arriving at the island, he discovered the remains and relics of Sunniva, and had a Church built, blessed by the Bishop.

The tradition of honouring these Saints dates back to around 1000 AD. Archaeological excavations at the end of the 1990s resulted in the discovery of house remains close to the St. Sunniva rock shelter. Traces of activity date back to Early Iron Age. The remains said to have been moved from Selje to Bergen about 1170 AD, according to the Latin Legend.

Today ruins in the area are still visible, probably remains of buildings made between 1000 and 1100 AD. The Monastery is dedicated to Albanus, the name of Sunnivas brother, who suffered a Martyrs death.

The Island has a rather strategic position, in the introduction of Christianity. As a place of Episcopal residence between 1067 and 1093 it's interesting to know that Olav Kyrre was king at that time. The permanent Episcopal Residence did probably move to Bergen, maybe around 1170 when it is believed that St. Sunnivas relics were moved?

Still today, people associate the area with magic and the supernatural, in particular the rock shelter where it is said that Sunniva was hiding. The Roman Catholic Bishop has, since 1930, used the term "Bishop of Selje", and the island is a famous place for pilgrims.